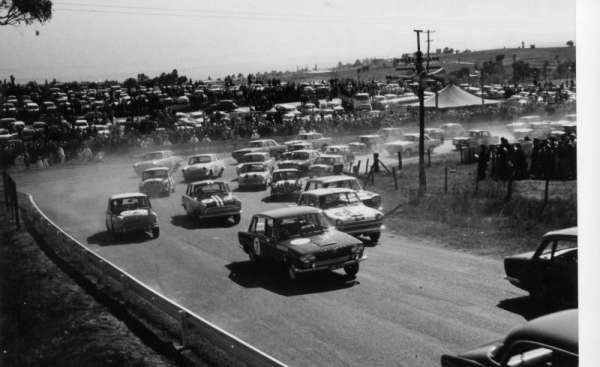 Triumphs are great at motorsport....

Triumphs even competed in Bathurst

Sprints are timed events, where a number of cars are on a race track together, but competing for the fastest lap times, not to be first past the finishing flag. Cars are normally set-off from a start position in pairs, with 10-30 seconds separating the next pair of cars. The time is totalled for several laps, and each competitor may get many "sprints" in a half or one day session. The overall winner is the one with the lowest total time over the entire meeting.

The Rules vary a little between organisers, but in most cases, outright racing is discouraged. When 2 cars are lined up, the drivers may agree that ones sets of first and the other "chases", or they may 'drag" to the first corner. Normally, the starter arranges the starting order, to limit the chance of cars having to overtake, especially on the first lap.

On tracks of around 1.5km length, it is usual to have about 6 cars competing for 4-6 laps at a time. At larger race circuits, the actual track configuration may be changed during the course of the meeting, so competitors get to experiences 2 or more layouts over a day.

Some Sprints are held on closed public roads, with suitable temporary safety arragements. Often, these events are limited to 1 car at a time on the track, and they are then more like a horizontal hillclimb (see below).

This is also a timed event, where cars start singularly and compete for the fastest time over several laps. Several cars can be on the track together, but the chance of passing is limited by the starter spacing out the starts. Usually, the track is not fully sealed, with most having a very hard, compacted gravel surface.

On tracks of around 1km length, it is usual to have about 4 cars and for 3-4 laps.

Racing involves multiple cars starting together, with the winner being the first past the finishing point, after a pre-set number of laps. Starts can be standing or rolling, with standing being the most common.

There are numerous categories for circuit racing, with cars divided by engine size, type, and level of modifications. Very complex rules control what can be done to vehicles, and the minimum standards they must meet.

Most race tracks can accomodate up to 30 cars per race. Often, there is some merging of classes or categories, so races within races often happen. Cars near the middle or even back of the field may actually be winning their category.

Special races are held for "historic" cars like Triumphs, as they are rarely competitve with modern cars, in open race meetings.

Regularity is an event where drivers compete to be the most consistent over a number of laps. The winner is the dirver who gets the closest time to one they pre-set. Regularity events are not races and organsiers usually discourage drivers from trying to set times that approximate outright racing speeds. Normally, these are rolling start events and involve 20-30 cars on the track at one time. Electronic driver aids are banned, and in many cases, speedos and/or tachos have to be covered.

Regularity events were originally conceived for "older cars" , where the owners no longer wish to push them to outright race speeds, but are still happy to mingle with multiple cars on the track together. The oldest car on the track can just as easily win this event, as the nnewest car. The extent of modifcation is rarely a factor in this sort of competition.

These are a bit like a sprint race, but held on a narrow up/down track, usually quite short, say 500-1000m long, and there is only 1 pass at a time. Only 1 car is on the track at any time, and the winner is the fastest time for the vehicle class over the course of the meeting. Meetings may include many different classes. Within any class, power to weight ratio plays an important role.