There was a problem rendering your image gallery. Please make sure that the folder you are using in the Simple Image Gallery Pro plugin tags exists and contains valid image files. The plugin could not locate the folder: images/MacleansBridge/2009
Subscribe to this RSS feed 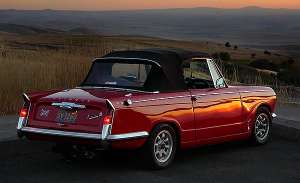 The Triumph Vitesse is a compact six-cylinder car built by Standard-Triumph from May 1962 to July 1971. The car was styled by Giovanni Michelotti, and was available in saloon and convertible variants. 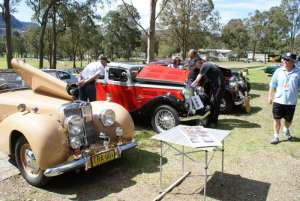 For 35 years, on Mother's Day, the Triumph Sports Owners Association of Queensland was the host club for the MacLean's Bridge Sports and Classic Car Display. This iconic event was held in the Tully Memorial Park where the Mt Lindsay Highway crosses the Logan River at South MacLean.

The event grew with the times and owes its longevity to the faithfull support of invited car clubs, individual owners and past and present members of the TSOAQ. This special day, devoted to "sports and classic sporting cars", has aimed at preserving the many endearing characteristics of sports cars of the past and those more modern examples that are developing "classic" status. For the TSOAQ and its supporters it has been the means of showing the public something of the unique driving and ownership experience that we enjoy and that others can aspire to.

All marques with sports and classic models have been invited to participate in the display, show their cars and share in the enjoyment of the wide variety of motoring innovation that has been attracted to MacLean's Bridge each year. Marques represented include; Triumph, Austin Healey, Jaguar, MG, Porche, Alfa Romeo, Ferrari, Ford Cobra, Lotus, Morgan, Maserati, Datsun, Toyota and Aston Martin to name just a few.

As the event has grown over time the venue had remained unchanged. Successive organizing committees of the TSOAQ had also become increasingly concerned with safety at the MacLean's Bridge site because of the ever increasing traffic numbers on the Mt Lindsay Highway which intersects the park. Given the incidence of annual "near miss" events the club had been concerned that the potential for a serious accident was increasing. The lack of suitable parking, the low general amenity of the site and a desire to provide an event and facilities in keeping with public expectations motivated the TSOAQ event management team to look for a site that addressed these operational constraints.

In the process of addressing these concerns the TSOAQ MacLean's Bridge Committee also considered the suitability of the traditional event date of Mothers Day each year. Because of the significance of that traditional date it was given lengthy consideration over a number of years. Ultimately a final decision to move from that date was taken based on the feedback from long time supporters of our event. Over the years, Mothers Day celebrations for the sports and classic car community have changed from a drive and picnic in the park to a variety of other ways of celebrating the day, with event supporters increasingly having to leave MacLean's Bridge early to attend family Mother's Day activities, often quite some distance away.

When arrangements for an alternate site were finalized the time was also right to move our event date to one week after Mother's Day providing greater opportunity to celebrate both occasions more fully.

The result is MacLean's Bridge at Lakeside on 15th May 2011.

To find out more about what's happening with the future MacLean's Bridge Display go to: www.macleansbridge.com

email: This email address is being protected from spambots. You need JavaScript enabled to view it.

Most Triumphs qualify for the "Special Interest Vehicle Concession" with the Queensland Government Department of Transport. There are limitations as to which types of vehicles qualify for concessional registration and where and when the vehicle can be used.

To qualify for the Special Interest Vehicle Concession:

Note : Vehicles fitted with a modification plate, code LH10 are not eligible for a special interest vehicle concession.

Vehicles with Special Interest Vehicle Concession Registration can only be driven under the following situations.

Some Pictures from Macleans Bridge 2009. 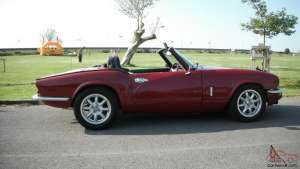 Published in Triumph Cars
Tagged under
Read more...
Page 1 of 4

You are here:Home»TSOAQ - Adrian Diehm
Home